Can Adults Have Bat Ear Correction?

Having outstanding ears can affect the balance of a person’s facial features. Ears that “poke” out are nicknamed “bat ears.” Surgical bat ear correction is performed to eliminate excessive ear protrusion.

Prominent ears are an aesthetic deformity that can certainly cause psychological stress. A child can feel ostracized and insecure due to relentless teasing at school. Name-calling is the norm, the dreaded moniker of “Dumbo” haunting a kid for years! Constant barbs from schoolyard peers cause many children to become unhappy and self-conscious. For this reason, the vast majority of bat ear corrections are performed just before the child starts school at the age of five or six. Surgery can sometimes be avoided by special taping and moulding of the ears during early infancy, but it is of little use after a few weeks of life.

Adults Can Have Ear Surgery Too

Although commonly performed on children, bat ear correction is also an option for those adults who missed out in childhood. Insecurities caused by ear deformities can carry on into adult life. Often, the sensitivities caused by oversized or protruding ears last a lifetime. It is never too late for a setback otoplasty! 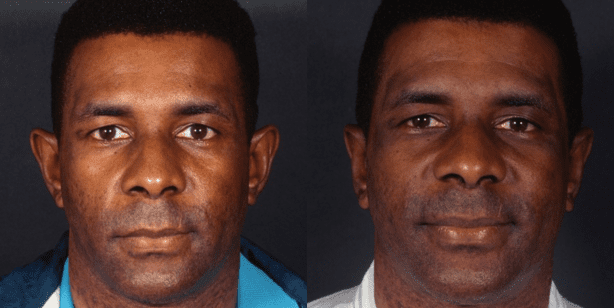 The position of the ears can radically affect one’s overall facial appearance. Many adults in various lines of work feel as if they would advance both professionally and socially if only their ears looked normal. They feel that having ears that stick out excessively from the side of the head could be a factor in not being taken seriously and not feeling attractive.

How Are Bat Ears Corrected?

A simple procedure known as setback ear surgery (setback otoplasty) can provide extremely satisfying results. This procedure involves a hidden incision in the groove behind the ear through which the ear cartilage is both reshaped and pinned back. It corrects protruding, prominent, or bat ears in adults as well as children. Patients usually go home the same day as surgery and can return to work next morning.

Excess cartilage in the bowl (concha) of the ear and the lack of a natural-looking fold behind it (a malformed antihelical fold) are both addressed. Local anesthesia is the norm. After surgery, a head dressing is worn for a week and a tennis headband for a month after that.

To learn more about bat ear correction, feel free to contact Dr. Brian Boyd by calling (310) 597-4734 or by filling out our online contact form.